From Hamburg to Abu Dhabi, local authorities and investors are pumping money into new museums, concert halls, and galleries to revitalise communities, encourage cultural exchanges, and bring a new lease of life – and revenue stream – to previously overlooked regions.

The sun has cracked the shell of the desert night. It’s not even 9 a.m. but the temperature is already nudging 35 degrees Celsius. I’ve never felt cooler, though. I’m enjoying the breeze that wisps under the vast silver parasol of the most striking new art gallery and the best new building in the Middle East, if not the world: the GBP 3 billion Louvre Abu Dhabi.

The first overseas ‘branch’ of the world’s most storied museum that opened in November 2017 is the boldest bet any modern city state has made on the appeal and value of art. The Guggenheim Bilbao, which transformed a once-sleepy Basque town into a stop on Europe’s grand tour when it opened 21 years ago, cost a seventh as much and was completed in half the time.

It was Frank Gehry’s swooping metallic gift to Spain that kick-started a renaissance in urban cultural investment that has spread to almost every city. London’s once abandoned Bankside Power Station and the surrounding riverbank area have been given a new lease of life by the Tate Modern. I. M. Pei’s Museum of Islamic Art in Doha has done more to put Qatar on the global map than any other institution, and it has been followed by new museums, galleries, and libraries designed by Dutch master Rem Koolhaas and Jean Nouvel (yes, that Pritzker Prize-winning Frenchman is all over the Gulf).

In Hamburg the Elbphilharmonie, the city’s newest concert hall, opened in 2017. Designed by Swiss architects Herzog & de Meuron, it is itself “a total work of art”, combining architecture, music, and a unique location at the port, says Hamburg’s Minister for culture and media, Dr Carsten Brosda. “Millions of people, Hamburg locals and visitors alike, want to experience this exceptional concert hall,” he told me shortly after it opened.

What’s the attraction of investing so much in architecture and culture? And is it worth the hefty price tag? The 21st-century urban Medici argue that not only can it help to put a city on the map, it can also change perceptions of an entire country, even a culture. Ask the woman who has spent more than anyone else on urban art – Sheikha al Mayassa bint Hamad bin Khalifa al-Thani,who runs the Qatar Museums Authority.

“Thanks to recent history,” she told me in a rare interview, “people see Islam as a violent religion. They come with bin Laden in their head. We want to showcase, with evidence, that Islam is a peaceful religion at the heart of the most intellectually and culturally sophisticated societies throughout history. That’s our message.” It’s one that comes through loud and clear from the artefacts in the Museum of Islamic Art – manuscripts, books, and scientific instruments from across Islamic civilisation, spanning the seventh to the 20th centuries.

Mayassa is not only looking to influence the West. By buying Western masterpieces and hosting exhibitions of Western art in Doha, she hopes to drag the more conservative elements of local society into the modern artistic world. “It is a good thing to celebrate Western art in this region. You have to accept, appreciate and, yes, learn from different cultures. In the years to come, we’ll be learning a lot about our Picassos, our Legers, and our Cezannes. There is incredible talent in this region.”

A question of value

It’s a bold vision, all right. But some question the value of such splashy investments. The Smithsonian, the world’s biggest museum and research complex, recently abandoned its plan for an outpost in London, while Helsinki has decided it doesn’t want to be home to another Guggenheim.

The man behind the Louvre Abu Dhabi, Mohamed Khalifa al-Mubarak, the 36-year-old chairman of the Abu Dhabi Department of Culture and Tourism, is undeterred. He points out that the United Arab Emirates have, in the modern era, become the purest expression of the triumph of globalisation over every other economic social, political, and religious force. Every kind of person from every country goes there to get a taste of modernity, even if it is only window shopping in Dubai Mall. There’s no reason why art shouldn’t join the party.

“The Middle East is the perfect spot for a new museum that addresses universal themes of humanity, common to all of us … to show how cultures and religions intertwine with each other,” he says. “We are a strategic connecting point and have been for thousands of years.”

Arab governments can scarcely spend too much to promote cultural dialogue between East and West, he adds, at a time when the ancient cities of Palmyra, Hatra, and Nimrud have suffered the destructive wrath of ISIS and Western tourists have been shot in Tunisia merely for visiting a museum. “It is a critical time to broadcast a light of hope, of the world coming together. We need to remind people that the Muslim empire flourished when we worked side by side with Jews and Christians.”

The Middle East is the perfect spot for a new museum that addresses universal themes of humanity.

I. M. Pei, now 101, agrees. When he opened the Museum of Islamic Art he told me: “I’m only an architect. But this building is very special to me. It helped to teach me not just about building but about culture, about the past, and the future. A brighter future.”

I can’t think of a better reason to book the next flight to Hamburg, Doha, or Abu Dhabi to see what human ingenuity – and a little cash – can do for our cities.

Over the next 20 years, more than 2 billion people will migrate to cities. With the growing number of urban dwellers come many challenges: congestion, pollution and a shortage of housing and recreation options, to name a few. So how will our transportation infrastructures keep up? Where will everybody live? Will there be enough jobs for everyone? In our ‘Future Cities’ series, we explore what type of innovations are helping cities to become more sustainable – and liveable. 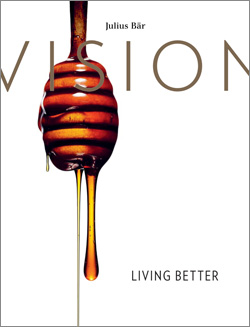 This article was originally featured in the latest edition of ‘Vision’ – Julius Baer’s stakeholder magazine. The most recent issue of the magazine looks at different ways that can help us, and those around us, to live better. You can download the magazine by clicking on the image above.